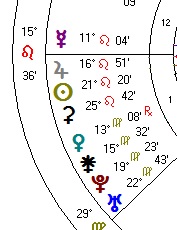 A Stellium occurs in an astrological chart when three or more planets group together within one sign or house. Think of it like this: When a planet stands alone in a particular house and sign in your chart, it carries its own significance -- sort of like a little voice, speaking up about its influence and role in your life.

If a group of planets are clustered together in that same sign or house, the little voice gets a whole lot louder! That’s exactly the way a Stellium works: Several planets unite as one powerful unit to exert an equally powerful influence in your life.

So, is the influence of a Stellium positive or negative? That depends on the planets involved and the houses and signs they reside in, as well as the aspects they make to the other planets in your chart.

Every Stellium is a concentration of energy, and you can imagine how that might either make things a lot better or present a real challenge, depending on the focus.

For example, if all the planets involved were lighter in energy -- say, the Moon, Mercury, Venus and Neptune -- and grouped together in a sweet, romantic sign like Libra, the Stellium would have a very romantic influence on you; you’d be the type that lived for love and harmony.

But if the Stellium involved heavier, more powerful planets and signs, such as the Sun, Mars, Uranus and Pluto in Scorpio, the effect of the Stellium as a whole would be more about extremes: intense desires, mood swings, obsession and destructiveness. Intensity, indeed!