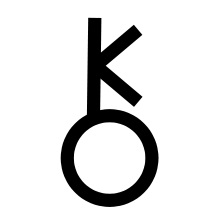 Chiron (pronounced KY-ron), discovered in 1977, is more than an asteroid but less than a comet. True to its maverick nature, astronomers are still not quite sure how to classify this rocky mass.

Chiron’s orbit lies between Saturn (the outermost visible planet and, for most of history, the limiting factor of the heavens) and Uranus (the revolutionary planet discovered in 1781), making Chiron a link between established tradition and unknown territory. It often functions as a bridge between the old and the new, fearlessly going where no one has gone before.

Don’t say to Chiron, ‘You can’t do that!’ -- because Chiron will respond, ‘Oh yeah? Watch me!’ and then proceed to do it! Chiron loves nothing more than a challenge.

Mythologically speaking, Chiron was a remarkable character. He was son of Zeus and a mortal. He was a centaur -- usually centaurs were bad boys, but not Chiron -- and was accomplished in many fields including music, medicine, herbs, astrology, mathematics, ethics, decorum and the arts of war and weapon making. He was a mentor to many of the famous Greek heroes.

He accidentally wounded himself in the foot with his own poisoned arrow, creating an injury that would not heal. From this, we derive the usual interpretation of Chiron as the Wounded Healer. However, more and more astrologers recognize that this is an incomplete interpretation.

To focus solely on the wound removes our attention from the more important healing aspect. Chiron expert Dale O’Brien considers Chiron a shaman, and nothing less. The wounding is simply part of the process, not the focus of it.

Chiron’s extremely elliptical orbit means that Chiron spends much longer in some signs than in others. It takes just over fifty years for Chiron to orbit the Sun.